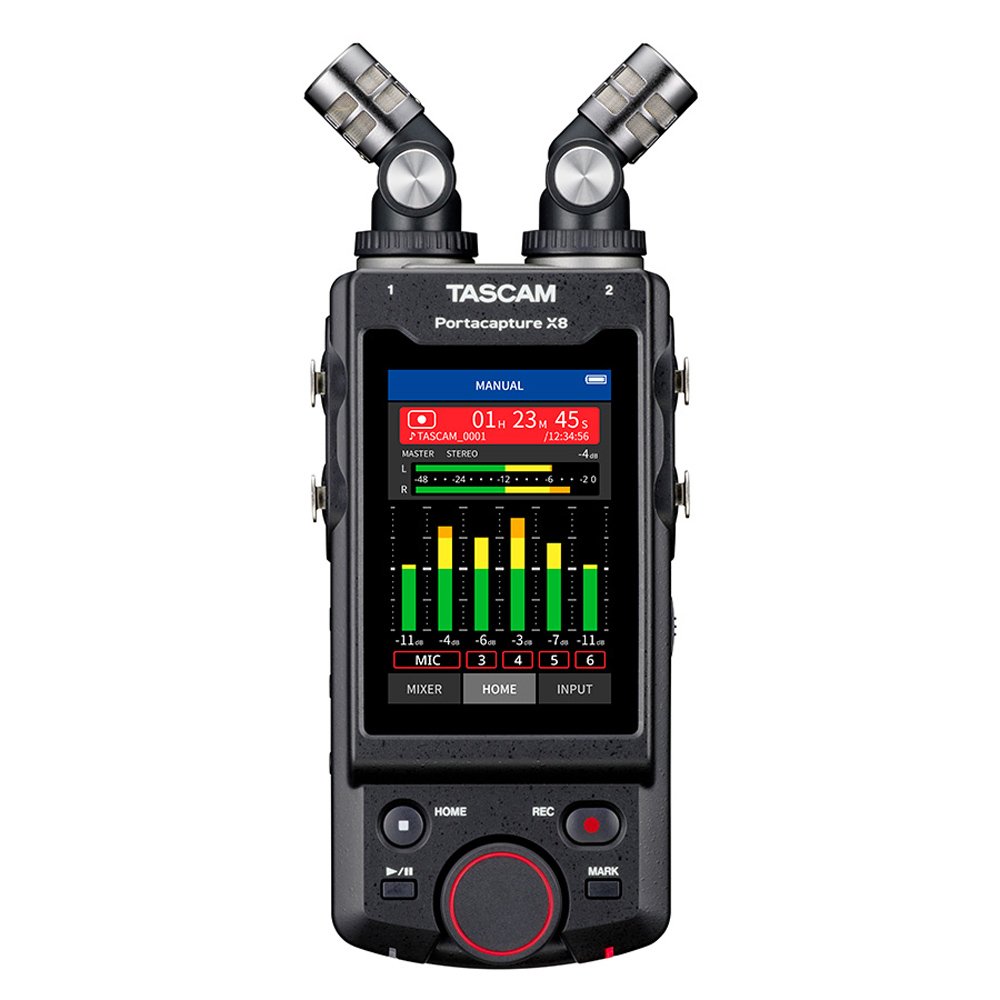 The Portacapture X8 uses an app-like set of configurations that optimize the unit for various recording tasks, including multitrack recording, voice capture for interviews, podcasts, music recording, field recording, and ASMR (Autonomous Sensory Meridian Response) for capturing those unusual / sensory related sounds. Combined with the recorder?s intuitive Launcher system and the incorporated 3.5-inch color touch panel display, the Portacapture X8 provides users with more time to focus on the actual recording without having to struggle with complicated settings.

The Portacapture X8 comes with two large 14.6mm diameter built-in condenser microphones. With the TASCAM developed HDDA mic preamps, these microphones are well suited for high quality audio recording. For easy setting of the available A-B and X-Y microphone patterns, the Portacapture X8 offers a detachable mechanism for easy configuration. For various applications and convenience, there are AK-DR series optional accessories that include an adapter for DSLR camera attachment, audio routing cables, a power supply, and more.

The TASCAM Portacapture X8 provides a wealth of DSP capability that dramatically outpaces the competition. This includes Compressor, Limiter, Low-Cut Filter, Noise Gate, Reverb, Auto Gain Control, and more. Equally notable, wireless remote control is possible via mobile devices such as smartphones and tablets (iOS and Android). This is achieved by downloading the TASCAM Portacapture Control app from either the Apple store or Google play and using the optional AK-BT1 Bluetooth dongle with the Portacapture X8.

With its 2 built-in large format stereo mics, 4 XLR inputs with support for both mic and line-level, AUX-IN, LINE OUT, and CAMERA IN/OUT terminals, the Portacapture X8 provides an abundance of IN/OUT choices for multiple recording scenarios. It should also be noted that the 3.5mm CAMERA EXT/IN connector also supports audio input of wireless microphones and more. Additionally, the Portacapture X8 is equipped with a CAMERA/LINE output with an attenuation function that allows for sending audio to external devices such as cameras.

Together with its multitrack record capability of 8 tracks (6 tracks plus 2 mix) and its 8-IN / 2-OUT USB Type C audio interface with support for USB bus power, the Portacapture X8 is a full-featured powerful handheld recorder both on its own or with a computer. Audio monitoring is possible via either the unit?s headphone output or the built-in speaker and the recorder also provides both mark and slate tone functions. Supported recording media includes micro SD, micro SDHC, and micro SDXC cards up to 512GB capacity.

?Internal mics can be used as a USB audio source
?Internal recording to SD card is available while the unit is functioning in USB audio interface mode

Write a review about the Tascam Portacapture X8