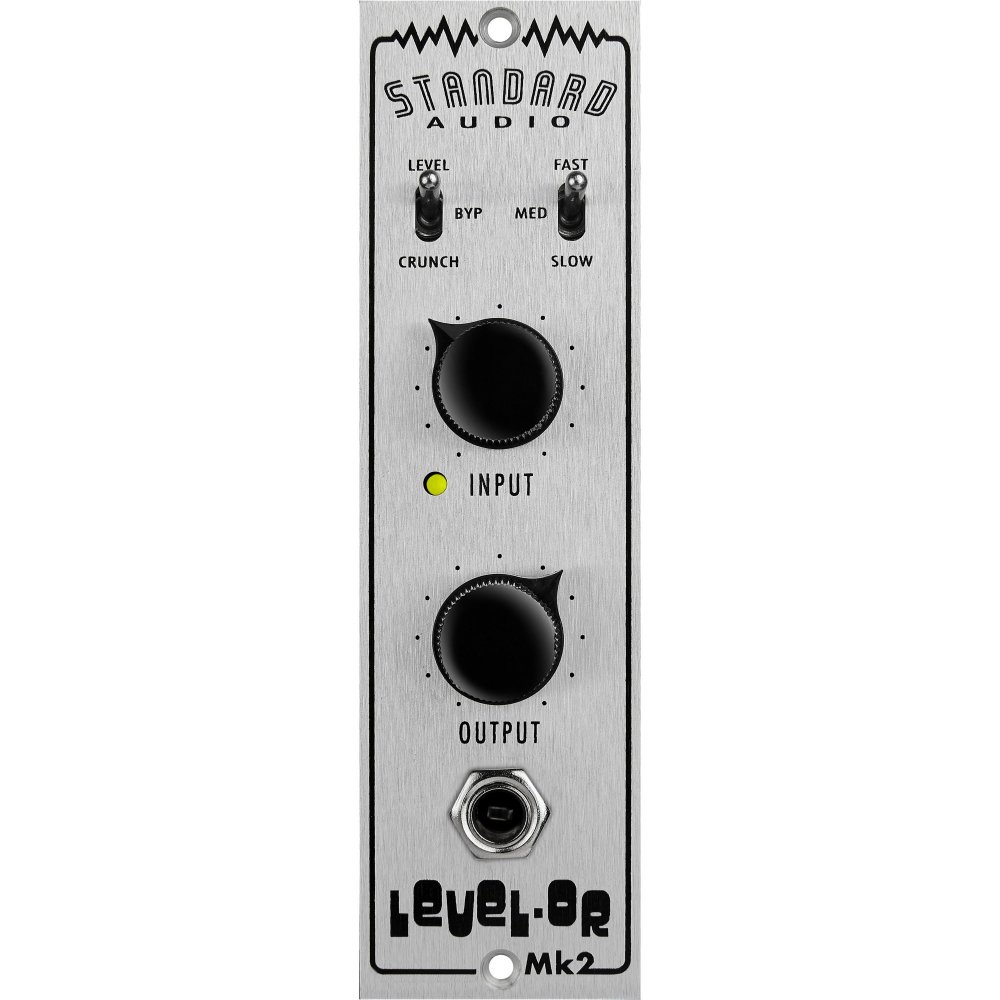 After 10 years of production and over 1,000 units sold, Stand Audio have decided that it is time to release a new version of the Level-Or that retains the sound and vibe of the original, but includes improvements and features suggested by customers over the years. For those not familiar with the original Level-Or, it is an aggressive JFET limiter and harmonic distortion generator inspired by the SHURE Level- Loc PA limiter from the 60s and 70s. The MK2 version takes the original concept to a new level with improved performance and added features making it an extremely versatile studio tool. To celebrate 10 years of smashing and crunching, the first run of the Standard Audio Level-Or MK2 is released as a limited "ANNIVERSARY EDITION" in black.

Lower Noise: Due to the aggressive nature of the circuit, a common issue with the original Level-Or was the noise present in Level mode. With extensive R&D and listentesting, we found a way to lower the noise considerably while remaining true to the tone and vibe of the original circuit.

True Relay Bypass: In addition to being able to select between Level and Crunch modes, there is now a 3rd option: bypass.

LED Indicator: A dual color (red/green) LED indicates which mode is currently active. The LED also indicates the amount of gain reduction or THD (depending on mode selected) by varying brightness.

Crunch Mode Low Pass Filter: When using crunch mode, the speed switch now allows the user to add a low pass filter to the output of the unit. This can be very useful for reducing harsh, higher harmonics while distorting. When set to FAST, the filter is bypassed. When set to MEDIUM, the LPF is 15kHz. When set to SLOW, the LPF is 8kHz.

Instrument DI: The original Level-Or had a line input via a front panel ¼" jack. While useful for interfacing with a drum machine or synthesizer, it was not useful for guitar or bass. On the Level-Or Mk2, we have changed this to an instrument-level DI input. The unit detects when a ¼" jack is inserted and switches over to the DI input. It is still possible for the user to configure the front panel ¼" input to be configured as a line input if desired.

Reliability: After delivering 1,000+ original Level-Or modules out into the world, the reliability of the design has been incredible. The Level-Or Mk2 ANNIVERSARY EDITION follows the same robust design approach and attention to detail.

With the improved noise performance, additional features, and same character and tone as the original, we've found that the Level-Or Mk2 is quite flexible and useful on all sorts of sources.

Write a review about the Standard Audio Level-Or MK2