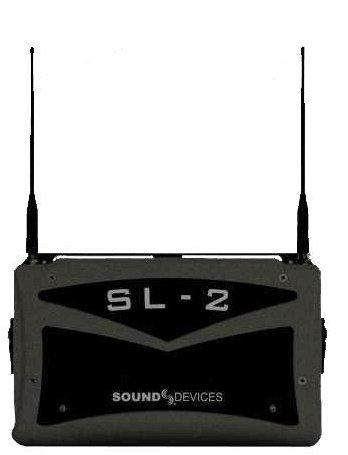 The SL-2 is a two slot-in wireless receiver integration system that easily mounts to the top panel of any 8-Series mixer-recorder. It accepts UniSlot and SuperSlot wireless receivers from a variety of manufacturers. Power to the SL-2 and receivers is supplied by the 8-Series mixer-recorder - no external DC connector is needed on the SL-2. Analog or digital audio is sent from the receivers into the mixer-recorder via the expansion port, reducing messy cabling for power and audio connectivity. The SL-2 offers antenna distribution to slot-in receivers, spreading out the placement of antennas for better RF performance. The rear panel of the SL-2 is equipped with two TA3 connectors for an additional four inputs of AES3 audio.

SuperSlot is an open, electro-mechanical connection specification, developed by Sound Devices, to simplify the interconnection of wireless audio transmitters and receivers with audio mixers and cameras for the entire industry to use. SuperSlot provides, power, audio, and control signals over a single multi-pin connection. SuperSlot-compatible products are offered by multiple manufacturers.

SuperSlot is an open standard, wireless receivers from several manufacturers are supported, allowing you to use your favorite brand, as well as leveraging your existing transmitter and receiver investment:

Write a review about the Sound Devices SL-2