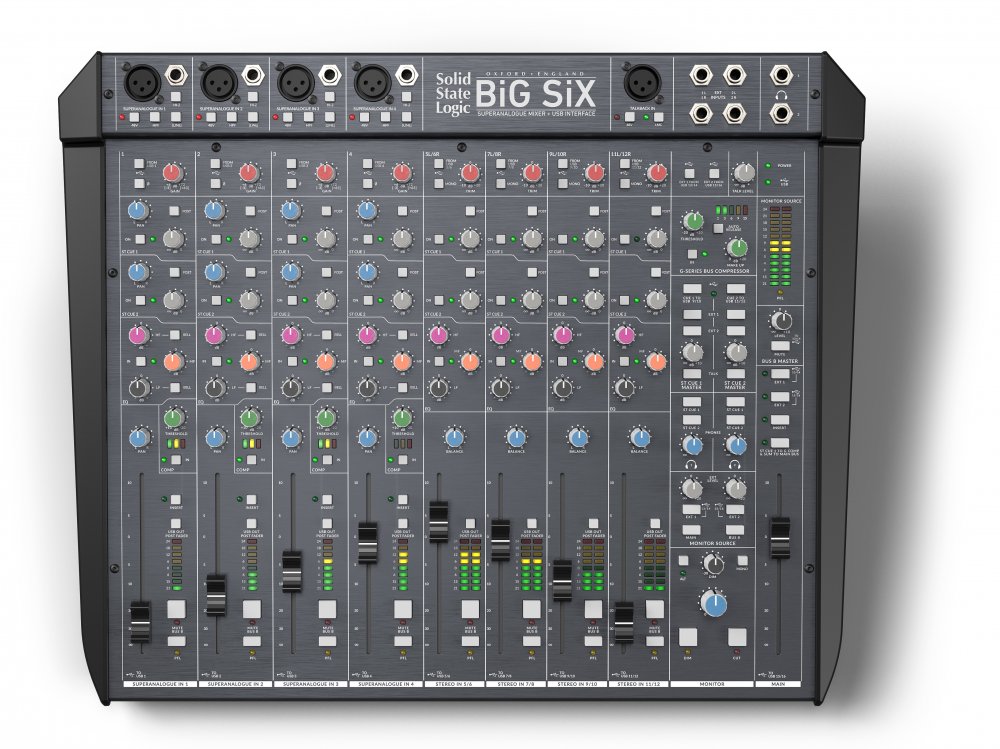 Whether you?re wanting to take your content creation or post-production to the next level with SSL analogue processing or require advanced hybrid workflow for multitrack recording or stem mixing, BiG SiX offers absolute flexibility and creative agility for any production scenario.

Bus Compressor
Strapped across the mix bus of BiG SiX is the legendary G Series Bus Compressor, ready to add drive, energy and that all important 'finished' sound to your productions.

Using exactly the same circuit topology as the original design found on the SL 4000 G-Series console, the Bus Compressor within BiG SiX has fixed 4:1 ratio, 30 ms attack and 100 ms release. These 'set and forget' settings are the go-to for many SSL large format console users, who will often engage the Bus Compressor very early in a session and build the mix into it.

USB interface
BiG SiX contains a class compliant USB 96 Khz / 24 bit interface to connect to a PC or MAC. The interface is paired with 16 high quality A/D and D/A converters that are connected to the SuperAnalogueTM signal chain in BiG SiX. The first 12 channels are split across the first 12 inputs/outputs and can be switched pre/post fader. USB channels 13-16 route to/from External inputs and Master buses. Alternatively, sends 9/10 and 11/12 can be fed from the stereo cue buses. Perfect for additional ITB processing.

Preamps
Fast, detailed and very, very punchy. BiG SiX?s SuperAnalogueTM preamps are capable of comfortably handling a wide variety of microphones (including ribbon) thanks to their super wide gain range. They feature a dedicated line input with Hi-Z, 48V, high pass filter and polarity switch, and will get the absolute best out of your new and vintage instruments and line level sources.

Channel compressor
Smooth, refine and add character with classic SSL channel compression. The compressors program dependent attack time (8ms " 30ms), release time around 300ms and the gentle 2:1 ratio allow the compressor to work across a wide variety of content and makes up one of the three compression flavours BiG SiX offers.

3 band SSL EQ
The channel EQ on BiG SiX has its roots in SSL?s classic E series, matching its EQ curves on the broadest setting. It is a broad stroke three-band design with high and low shelving filters at 3.5 kHz and 60 Hz, adjustable from +15 dB to -15 dB of gain and a fixed Mid Frequency control at 700 Hz. The HF and LF bands can be independently switched between shelving and bell curves, and can be found on every channel of BiG SiX.

SuperAnalogue design
Initially developed for the SL 9000 Series consoles to take analogue performance to the next level, SuperAnalogueTM technology is at the heart of BiG SiX and is fundamental to what sets it (and SiX) apart from other desk-top mixers. SuperAnalogueTM technology is the sum of an applied design philosophy, constant invention, and dedication to optimizing every detail of our precision audio products. There are many contributing aspects, including our bespoke circuits, ground-breaking low-noise gain control, servo-coupled amplifier stages, and many more.

Stereo inputs
BiG Six features four stereo SuperAnalogueTM line level inputs. These can be either be fed from 1/4 ? TRS balanced jack inputs on the rear of the unit or switched to the DA converters from the relevant USB returns. The USB input is before the Trim gain control. To add further flexibility, the four stereo inputs can be switched to dual mono, or will automatically switch if only the left input is used.

Stereo cue
There are two stereo Cue sends on each channel of BiG SiX with independent level control. They are fed from channel pre-fader post-insert. Via the master section, each Cue send can be routed with a number of additional sources to provide FX sends and headphone mixes. To add further hybrid workflow flexibility, BiG SIX can re-route USB channels 9/10 and 11/12 from both sends to provide dedicated cue feeds to your DAW. Perfect for ITB effect processing."

Console grade faders
Channel level on BiG SiX is controlled by a 100mm long-throw SSL faders. If you have ever piloted an SSL console, you quickly realize not all faders are equal. With a large sweet spot around 0 dB, its easy to make subtle adjustments with confidence.

The notorious LMC...
At the top of BiG SiX is the legendary Listen Mic Compressor as originally found in the centre section of the legendary SL 4000E. With its smash everything attitude made famous by that drum take, it?s the ?80s producers secret weapon.

Professional metering
Fast, accurate and detailed. The metering on BiG SiX represents professional +24 dB and +18 dB standards and are fine tuned for both analogue and digital audio, letting you know exactly how hard you?re diving channels and hitting convertors.

Write a review about the Solid State Logic BiG SiX