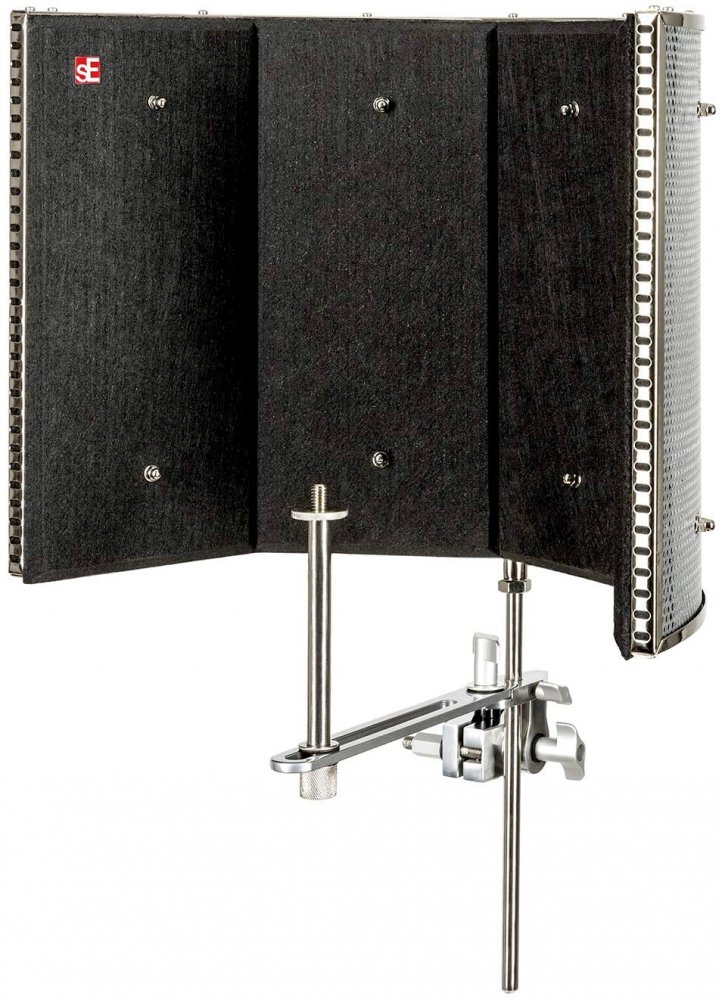 The Reflexion Filter is basically a portable device for recording live sound sources with reduced room ambience. It is an advanced composite wall which is positioned behind any microphone by means of a variable position stand clamp assembly which ships with the product. The main function is to help obtain a dry vocal or instrument recording. This is especially useful in studios without proper acoustic treatment, but can also be used to help record takes in control rooms, where the performer also has to operate the recording device, or in rehearsal studios to reduce ambient noise.

The Technical Bit
The Reflexion Filter has 6 main layers. Firstly, a strong layer of punched Aluminium which allows sound waves to pass through it, diffused, to a layer of absorptive wool. The sound waves then hit a layer of Aluminium foil which helps dissipate energy and break up the lower frequency wave-forms, and from here they hit an air space kept open by rods passing through the various layers. The air gap acts as an acoustic barrier. The sound waves then pass to a further layer of wool and then through an outer, punched, Aluminium wall which further serve to absorb then diffuse the remaining acoustic energy.

The main absorber has 4 formed pieces of state-of-the-art specialist acoustic absorptive material attached to its face via the extended separation rods, which further serve to absorb and then diffuse the sound waves as they pass to the main filter.

The stand assembly comprises a mic stand clamp fitting, which attaches by means of a vertical joint to the horizontal bar assembly onto which both the Reflexion Filter, and any standard fitting shock mount can be fixed. The microphone (in its shock mount) can then be moved both vertically and horizontally along the bar, and the Reflexion Filter itself can be moved vertically to obtain the optimum working position.

How does it work
The various layers both absorb and diffuse the sound waves hitting them, so progressively less of the original source acoustic energy passes through each layer. This reduces the amount of energy hitting un-treated walls and other surfaces so there is less of the original source reflected back as unwanted room ambience to the mic. The Reflexion Filter also helps prevent any reflected sound reaching the back and sides of the mic. Its shape and size have been carefully tested to maximize absorption while keeping coloration down to only around 1dB, and leaving the microphone's polar pattern unaffected.

The Results
'Independent test results from the Tongji University Audio Lab in Shanghai show audio image colouration with and without the sE Reflexion Filter. The tests (carried out by China's leading Acoustic Engineering University completely independently) clearly show extremely low levels of coloration when using a microphone with the Reflexion Filter while recording (20Hz to 20KHz).

This was one of the greatest challenges in designing the RF. Other companies have now started to try and copy our designs (without breaking the patents which are what make the Reflexion Filter actually work!), but fail to achieve such good results because the designs are too simplistic.

The RF comprises several layers of Aluminium and patented acoustic fibreboard separated by acoustically isolating air gaps... and therefore manages to remove large amounts of room ambience with a very compact design. The whole idea was to make the unit as effective as possible, but in the smallest space... otherwise what would be the point... you may as well treat a wall behind the mic.

The shape of the RF is also critical to the design as it randomises any Reflections back from the surface of the filter. Products which are semicircular (without the flat diffuser panels the RF has) will concentrate any inconsistently reflected frequencies onto the mic... the worst possible scenario.

Another very poor design though is a simple 'V' shape behind the mic. This creates one of the worst coloration problems you can manage to achieve when recording audio. Think about problems of Bass Accumulation in room corners... the bass is accentuated worst in 90 degree corners, so any baffle placed behind a mic which is this shape creates huge coloration problems in bass frequencies. This also adversely affects higher harmonic frequencies because of the massive energy in bass frequencies exciting these higher harmonics. A simple flat panel on a wall positioned behind the mic is a much better solution, as it does not create coloration, but still limits at least some of the early reflections in the room.

In Summary
All in all, it's a very clever and desirable piece of kit. It allows you to record vocals, guitars etc with a drier sound without having to have an acoustically treated room. It's portable. It uses state of the art materials. It works and it's a fraction of the price of acoustically treating your studio environment!

Write a review about the SE Reflexion Filter Pro

4.5
Gary Cable
Kelowna, BC
May 2, 2017
2nd best in class vocal isolation
Excellent product! Superb isolation for taming nasty room reflections attacking the back of LDC microphones. One caveat: the mounting system sits away from the stand and the unit is somewhat heavy, so you need a high quality stand with a heavy base (eg. Read more
Latch Lake) or sand bags to keep the system stable
View more products from SE