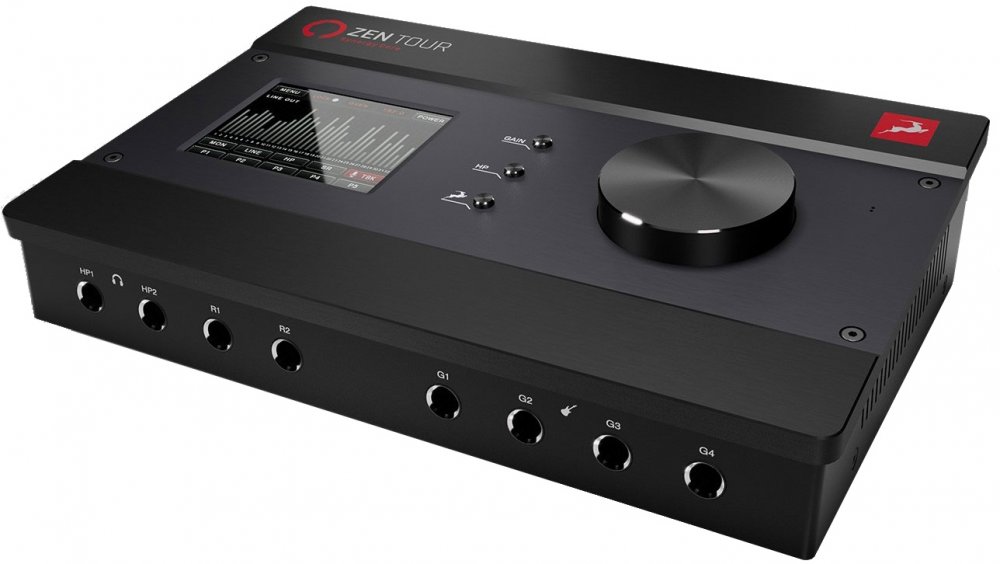 Be the first to write a review
Free shipping in Canada. Conditions
Get 2x Edge Solo & Bitwig with a Zen Tour interface. Offer valid until July 31, 2022.

It goes beyond the essentials. Everything you need to accomplish Recording, Mixing and Mastering is included.

For what it brought to the pro audio trade back in 2016, the original Zen Tour is still in a league of its own. Never before had the pro audio community enjoyed this kind of connectivity, sound quality and touchscreen control on a desktop unit. Hard to surpass it may be, but the all-new Zen Tour Synergy Core more than lives up to its ancestor's impressiveness.

Antelope's consummate Synergy Core FX processing is an obvious highlight of the new Zen Tour, but the 4x ARM DSP cores and 2x FPGA processors handling system I/O and as many as 256 instances of lifelike, low-latency audio effects merely scratch the surface! Familiar on the outside, the Zen Tour Synergy Core has been reimagined internally to establish new standards in audio quality and performance in its category.

With up to 130dB dynamic range on the monitor outputs and Antelope's signature Acoustically Focused Clocking technology, the AD/DA conversion bar is raised high. And then comes the connectivity. It's 8 preamp/combo inputs and 14 outputs (monitor, headphone, line, reamp) for the analog part, with ADAT & S/PDIF expandability adding a further 10 digital I/O channels.

For computer connection, both USB Type-B and Thunderbolt 3 are found on the same unit and users of multiple computers/operating systems can switch connections on the fly. The touchscreen control borrowed from our flagship Goliath interfaces and the 36 Synergy Core FX included to get you started (incl. 11 guitar amps and cabs) make for a complete all-around solution for bands and producers both for desktop and on the go.

Put simply, the Zen Tour Synergy Core punches above any competing product with its unbeatable value and vast studio potential.

STACKED WITH EFFECTS POTENTIAL
With 4x ARM DSP cores and 2x FPGA processors, the Zen Tour Synergy Core can process up to 256 FX instances over 32 audio channels with ultra-low latency and zero CPU drain. Users can now choose among a wider variety of DSP-based effects, such as Auto-Tune Synergy (by Antares & Antelope), Vari-Speed Tremolo, Space Flanger, Opto-2A, and others. 36 premier Synergy Core FX culled from our growing library are included to get you going immediately.

ROUTE ANY AUDIO
The comprehensive Routing Matrix inside the software Control Panel houses a full-fledged digital patch bay to freely route audio between the interface's analog and digital inputs. Process DAW tracks through Synergy Core FX and re-amp guitar DIs with the Shred Guitar Amps & Cabs or integrate external audio equipment. With the 'training wheels' removed, your workflow can be as esoteric as you want it to be.

STURDY & PORTABLE
Hand-assembled in Europe, the Zen Tour Synergy Core can adorn both your studio desktop and your band's practice space with equal success - then live to tell about it!