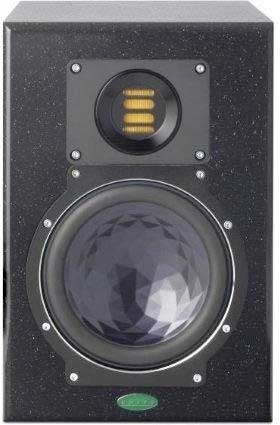 The Rock MK-III still retains the same sized Baltic Birch sealed cabinet and Corian front baffle as previous versions of the Rock along with the 50kHz JET 5 folded ribbon tweeter.

New feauture summary comparison
The new Rock MK-III is in production and available now featuring the new 7" / 180mm Crystal Membrane woofer design as used in the Mini-Rock and Boulder MK-III models. The same original discrete analog SP64 input/crossover is retained as all the previous Rock models, ensuring the same sonic footprint that has proved to be so popular with thousands of users worldwide over the years. The main sonic difference over previous models is higher SPL figures.

Description
The Rock MK-III, like it's MK-II predecessor is an incredibly accurate, critically acclaimed 2-way active mixing reference near-field monitor, considered by many professionals to be the reference all others are measured by. Designed for demanding audio professionals spanning a wide range of applications including tracking, mixing and critical mastering applications. The Rock is equally at home sat atop a large-format mixing console or in a high-end studio, a home studio or a mastering facility.

Sealed Cabinet Design
Unlike many near-field monitors, the cabinet is a sealed enclosure that doesn't rely on a resonate port to deliver low-end performance. The advantage of this design philosophy is accurate bass with better time domain performance and a gradual 12dB per octave roll off as opposed to a 24dB roll off with ported designs. The cabinet is made from 12mm, 9-ply Baltic Birch plywood. To add density, mass and rigidity the front baffle is manufactured from 12mm Corian and bonded to the 12mm ply baffle to provide the perfect mounting platform for the drive units.

Folded Jet 5 Ribbon Tweeter
This high frequency driver enthrals with its lightning-fast response and wide dynamic range, offering minimal distortion, lots of headroom and a distinctly wider frequency range than conventional dome tweeters. The results are a transparent and effortless sound image which is non-fatiguing at any level and for long intense monitoring periods.

The JET tweeter was developed to perfection on the basis of the famous Air Motion Transformer by loudspeaker pioneer Dr. Oskar Heil. Its operating principle is based on a concertinaed-foil membrane, driven by a strong magnet system of neodymium rods. This motor drives the air considerably faster than the pistonic motion of a conventional driver, with gains in higher sensitivity and extraordinary dynamics. Due to many additional design changes, including special patented gluing and surface processes, improved new neodymium magnet system, even higher efficiency, higher sound pressure levels and frequency response up to 50 kHz was achieved.

The core of the JET tweeter is the folded foil membrane. With a fold width of only 0.84 mm, a major requirement in the JET production is precision. To guarantee repeated accuracy and unchanging quality even with high production capacity, gluing and handling are now executed by two SCARA robots. The folding and fixing of the membrane, however, are executed by hand, since for production steps requiring extreme precision, the manual dexterity of skilled technicians is irreplaceable. Due to continuous improvement, the JET 5 tweeter creates an effortless, airy and resonance-free image up to 50,000 Hz.

Crystal Membrane Woofer
A new crystal membrane woofer measuring 180mm ( 7" ) has been selected. This eye-catching surface of the crystal membrane is more than just an attractive design feature. The crystal-shaped inverse aluminium dome is joined to a paper cone in a special gluing process to result in the desired sandwich construction. The crystal cone aluminium-foil stamping stiffens the aluminium dome, diminishing resonances and minimising coloration, while improving power handling and dynamics. The voice coil design of the woofer results in an expanded frequency range, and driver surround allows for longer cone excursions for truly prodigious volume and lowest distortion, a unique engineering achievement for a driver of its size.

Input/Crossover
The same original discrete analog SP64 input/crossover is retained as all the previous Rock models, ensuring the same sonic footprint that has proved to be so popular with thousands of users worldwide over the years.

Applications
Rocks are ideal in a 2.1 or 5.1 system configuration when partnered with an Avalanche Sub-woofer.

Write a review about the Unity Audio Rock MK-III